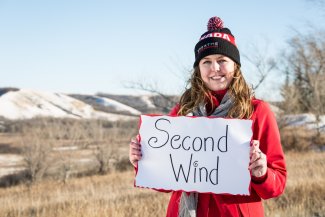 The very, first thing I wanted to do was take the biggest breath I could. Then I wanted to feel what it was like to move and not be short of breath. I was able to walk upstairs! That was pretty exciting.

In February of 2013 Nicole caught a cold that she just couldn’t seem to get over.  Nicole had a dry cough and was very short of breath. She found herself avoiding stairs and parking close to doorway entrances because walking far distances and doing activities that once seemed effortless became impossible. Her disease had gotten worse and she didn’t know how long she had left.

The Sacrifices to Survive

Knowing that a lung transplant was her only option to live, Nicole attended a 6-week pre-transplant physiotherapy program in January 2014.  Because lung transplants for people from Saskatchewan are done in Edmonton, this meant she had to temporarily move out of the province with a support person. Nicole and her husband Clayton, however could not afford this.  Nicole was forced to move on her own and, on weekends, a different friend or family member came to help her. Born and raised in Saskatoon, Nicole had never lived elsewhere until she traveled to Edmonton to prepare for her transplant. She recalls how difficult it was to be away. “It was tough being so sick and going through the grueling preparation for a lung transplant away from my loved ones and support system. Whether you can afford a second chance at life should not be a factor in your decision to be put on the transplant list.  It shouldn’t matter how much money you have,” says Nicole.

Getting Her Second Wind

In July 2014, Nicole received her life saving call.  She and her husband took an air ambulance to Edmonton where they both stayed for another three months while Nicole recovered from the transplant. She describes receiving an organ donation as “a very humbling and expensive process.” “The very, first thing I wanted to do was take the biggest breath I could. Then I wanted feel what it was like to move and not be short of breath. I was able to walk upstairs! That was pretty exciting.” Although Nicole, was worried about her and her husband’s finances, she was happy to be alive.

Today, Nicole is back in Saskatoon with her husband Clayton and her two little balls of fur, Hudson and Levi, Shih Tsu Yorkies. She is also back at work. In her spare time she is enjoying reading and making crafts again.

Nicole has always been a positive person with a willingness to help others. She has been an advocate for lung health but has become even more involved since receiving her transplant.  Nicole says, “Getting my second breath means everything to me. I went from not having a future to being able to plan things again. Not a day goes by that I don’t think about my donor - the stranger who gave me my breath back.”