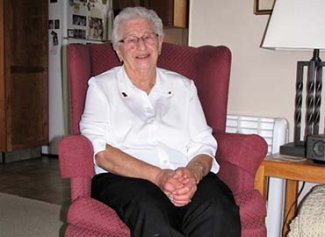 I was thankful to Fort San and the Saskatchewan Anti-Tuberculosis League for giving me a chance at life. I was taken care of. I was cured and Fort San became a second home to me.

Our teenage years are instrumental in shaping our futures. Imagine being a teenager diagnosed with a life-threatening contagious disease and having to move away from your home without your family and friends. Mary doesn’t have to imagine it, but rather remembers exactly what that was like.

Mary grew up in Melville, Saskatchewan and recalls the tuberculosis (TB) Screening bus rolling into her home town. In 1945, at a time when TB plagued the province, she describes a memory of people lining up to have a chest x-ray. “I remember standing in line with so many others from my community. We were all patiently waiting and hoping that our x-rays didn’t reveal anything on our lungs,” says Mary. Mary’s x-ray was clear at that time. However, her dad’s showed pulmonary TB and as a result he was admitted into the sanatorium and treated. With Mary’s father diagnosed with TB, her family was followed and screened for the disease regularly. Three years later, one of Mary’s routine screenings revealed she too had contracted TB. In January of 1948 she was admitted into the Fort Qu’Appelle Sanatorium (Fort San). Mary was just 17 years old. “I was a lost soul at first leaving behind my parents, my two brothers and my friends. It was hard in the beginning. I didn’t know anyone and it was a new place away from my home.”

When Mary was admitted into Fort San, she was part way through grade 11 and back then they didn’t have the medications they have now to treat the disease. Treatment mostly consisted of rest, sunshine, and fresh air. Mary was put on bedrest for 14 months and had limited opportunity to finish her studies. “I remember them wheeling my bed outside so I could soak up the rays from the sun and breathe in the fresh air. From being in bed for so long my legs were like rubber. I was also given injections into my lungs every two weeks.”

The fresh air, sunshine and rest worked. Three years later Mary’s TB was cured. One would assume that she would be all too eager to go back to Melville, but after being away from home for so long, her friends had all graduated high school and many of them had moved away. Yet Mary was never resentful of the time she spent as a patient in Fort San, but rather felt grateful. “I was thankful to Fort San and the Saskatchewan Anti-Tuberculosis League for giving me a chance at life. I was taken care of. I was cured and Fort San became a second home to me.”

Because of Mary’s great typing skills, she was offered a job in medical records located on the grounds of the Fort Qu’Appelle Sanatorium. She chose to stay and live at the staff residence on the grounds. She began a wonderful career that gave her financial security, benefits, friendships and even a chance at love. In 1955 she married her husband who also worked at Fort San in the lab. Together they later had two children. After 35 years, Mary retired in August of 1986 when the Fort Qu’Appelle Sanatorium medical records were closed down. Her work gave her great pride. “My experience at Fort San taught me if you are going to do something, do it right and do it well.” It’s been Mary’s motto her entire life, and one many of us can aspire towards. All of the staff at Fort San had a strong commitment to fighting TB and tremendous compassion for TB patients. Doctors, nurses, and staff walked that extra mile to help the patients. The patients themselves cheered and nurtured those around them. A caring, loving atmosphere permeated the sanatoria. Bonds of friendship were formed which remained strong despite time and distance.

Today Mary doesn’t live too far from the Fort San grounds. Decades later, she remains in touch with her colleagues who are now friends and who also live in the area. They have a special bond, and share memories of Fort San that they reminisce over often.