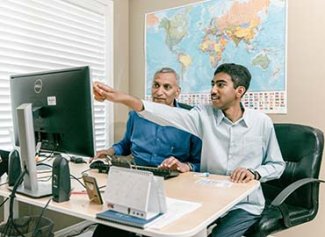 I would not have been able to go to Saskatchewan and build the pediatric respirology department without the support of Lung Sask. I knew they had my back and the interests of Saskatchewan at heart.

“When a doctor is just done training, part of them is confident in what they think they know and part is scared about all they don’t.  I was faced with this paradox right after training to become a pediatric respirologist in Toronto and was recruited to Saskatoon to start a pediatric respirology program. There had never been a Pediatric Respirologist in the province – but Lung Sask, Department of Pediatrics, and the Division of Adult Respirology knew the province needed one.  I had great clinical expertise but no clue how to build a program. Naively, my plan was to head out to Saskatchewan, build the program, and go back to Toronto within two years!

This was long before the James Pattison Children’s Hospital. When I arrived, all of Pediatrics was tucked into a wing of Royal University Hospital. We felt like neglected children dependent on crumbs from a very adult-focused facility. I remembered one of my teacher’s words: “you don’t invest in buildings; you invest in people.” So, I focused on finding those champions – everyone from doctors, nurses, respiratory therapists, to housekeepers. These were the people who would go and champion respiratory care. The Respiratory Division was built from scratch by these champions and would not exist without them! In my 8.5 years with the department, we saw over 25,000 children with the most severe respiratory problems in the province.

Yet, I knew this was only the tip of the iceberg. There were so many more we would never see directly. 60% of our patients were from outside the Saskatoon Health Region in the furthest reaches of the province. I realized the “teaching to fish” philosophy was the only way we would be successful. So, I trained the champions and then they trained others across the province so we could increase our leverage and impact. I personally taught more continuing education sessions for practicing doctors than any other physician in the Faculty during my time in Saskatchewan. Many of these physicians and staff are still serving in Saskatchewan and some have gone on to be leaders in Canada.

After 8.5 years I left Saskatchewan for family reasons - and most of all, I miss the people – our staff, team, and our patients! People in Saskatchewan do what it takes to make it work, even if it is with limited resources.
I would not have been able to go to Saskatchewan and build this division without the support of the Lung Sask. Before I arrived, they helped do the promotional and advocacy groundwork for why a pediatric respirologist was needed and helped secure the funding for my professorship. They taught me how to deal with the government and how to source funding that led to the growth of our service, hiring of key staff, and purchase of equipment.

I knew the Lung Sask had my back and the interests of the people of Saskatchewan at heart. For after all, what is Lung Sask if it isn’t the staff, the volunteers, and the people of Saskatchewan who make it work today and made it work for me and for the children of this beautiful province. I remain grateful for Lung Sask’s part in making our Division take off from the ground and fly.
It was a privilege that I will always treasure to have been part of the birthing and building of the Pediatric Respirology Program in Saskatchewan. To watch this baby grow and develop over the years is a gift.”