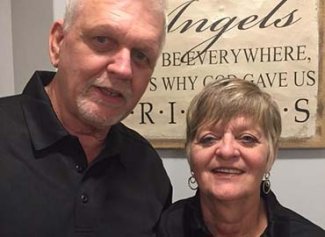 The worst part of being diagnosed with a terminally ill disease is that you quit dreaming into the future because you know you won’t be there. I didn’t ever lose hope, but I lost my ability to dream.

A miracle can be defined as a highly unlikely, extraordinary event.  Some people believe miracles are the work of a divine agency or higher power.  Most think they are rare but wonderful.  Don Gill would say miracles really do happen and they can be life-saving.

Breathless And Hoping For A Miracle

Don had a pesky cough that just didn’t seem to want to go away. He wasn’t overly concerned but in May of 2013 he finally went to his doctor.  After some tests and a referral to a breathing specialist, he was told he had idiopathic pulmonary fibrosis (IPF) – a disease that scars the lungs and has no cure other than a lung transplant.  Don was given 3-5 years to live. “I was diagnosed with a terrible disease and a horrible way to die.”

Not long after his diagnosis Don became very ill. Short of breath and dependent on supplemental oxygen, he had no choice but to leave the workforce. His illness became both a physical and financial battle.  Don suddenly went from making a very good wage every month to little income.  “We had no choice but to sell off assets and to cut expenses. We paid the bills that needed to be paid the most.  I wouldn’t sell my house because I didn’t want my wife to be without a home when I was gone. We were hoping for a miracle.”

The First Miracle – The Beginning Of The Lung Transplant Journey

Don was introduced to transplant specialists in Saskatoon who told him they would like to see if he would qualify for a lung transplant if he was willing.  “I was absolutely willing. A lung transplant would allow me to survive. It was my first miracle,” says Don.

After many tests, Don was given even more devastating news. He was told he did not qualify for a lung transplant because in addition to his lung disease he also had prostate cancer.  He would have to beat the cancer and remain cancer-free for two years before he would be considered again.  Doctors told him the likelihood that he would live long enough was less than 5%.  But 5% was still a chance! “I knew how upset I would be with myself if I didn’t take the chance. Along with my wife and kids, we decided as a family to face the cancer head on, to stay positive and wish for a miracle.”

The Second Miracle – Beating The Odds

Knowing Don was on borrowed time, a cancer specialist suggested he try a trial treatment for prostate cancer that could cut his cancer treatment time in half. “The treatment was a success.  The time it saved me was critical.  It was truly a gift and another miracle,” exclaims Don.

Although Don had beat cancer, his lung health was deteriorating quickly.  After being placed on the lung transplant waiting list he was told people usually wait two years for a new pair of lungs and that he just didn’t have that kind of time.  However just forty-eight hours later Don got the call of his life, a pair of lungs were waiting for him.  “I thought this is my third and final miracle. I just couldn’t believe it,” Don recalls.  He was air lifted to the University of Alberta Hospital in Edmonton where all Saskatchewan residents go for their lung transplant and recovery. “I cannot even explain how excited we all were that I was getting a lung transplant,” says Don.  Soon after his arrival the doctor approached Don and said two words that made his world stop, “dry run.”  A dry run means that the lungs weren’t suitable for Don.  Normally when a dry run occurs the patient is sent home to be with family.  Don however was too sick and moved to a ward on the hospital where he feared he would die.

“It was really difficult to be so excited and given so much hope only to have the wind let out of your sails.  The worst part of being diagnosed with a terminally ill disease is that you quit dreaming into the future, because you know you won’t be there.  I didn’t ever lose hope, but I lost my ability to dream.  I always hoped for the best.  If I had a 1% chance I still had a seat or chair at the table, I believed it could happen, I thought maybe I could have one more miracle,” recalls Don.

Don remembers lying in bed and he thought he felt someone grab his big toe, but no one was there.  He smiled and remembered when he was a child his mom used to tease him by squeezing his toes.  He said he heard his mom say his name. “I felt like my family was watching over me and my mom was my angel. I was finally at peace.  I didn’t know if this was the end of my road, but I felt okay with things.” Five days after arriving in Edmonton on June 19, 2015 Don received yet another miracle. Don was given a life-saving double lung transplant.