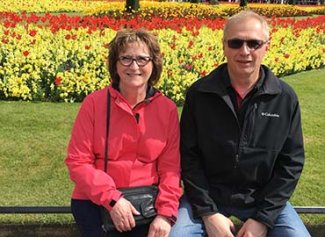 I believe that research is critical to learn more about what may lead to a cure for lung disease. I joined Lung Sask’s Sleep Apnea and COPD support groups to find the support I needed as a patient.

“I was diagnosed with COPD in 2010. The diagnosis surprised me since I had quit smoking in 1996 after having pneumonia. I thought your lungs healed once you stopped smoking. I jumped into action by faithfully participating in the Fit Life Program in Prince Albert three times a week, using my puffers as prescribed, and continuing to be active outside of the program.

In 2012 my husband started showing symptoms of early-onset dementia. Since he was diagnosed with sleep apnea in 2012, we had hoped that using the CPAP machine would help with his memory problems.  My dad passed away from pulmonary fibrosis and his memory was poor until he was put on oxygen. Our theory was you can’t think if your brain isn’t getting enough oxygen. In 2015, I was also diagnosed with sleep apnea. Prior to being diagnosed, I woke up every morning with a terrible headache. The CPAP therapy helped since my headaches almost disappeared!

The staff from the Fit Life program suggested the doctor send me to be tested for home oxygen. My oxygen levels would plummet with minimal exercise. My lung function had declined and I was tested and prescribed home oxygen for exertion in 2018.

Sadly, my husband's health declined at a rapid rate. In January 2020, he suffered from a grand mal seizure one morning at home. He was admitted into the hospital and was assessed at Level 4 care and was admitted into a long-term care facility in late February at 60 years old. Unfortunately, COVID-19 hit our world and I was not able to visit him in person after things shut down in March. He passed away on July 25, 2020.

The rapid decline in my husband’s health was the wake-up call I needed to focus on my own health again.  I have isolated most of the last two years so I had time to grieve, rest and find lots of good recipes that are also good for my waistline! My next steps are to kick myself back into action. I will focus on walking first - they may be baby steps but I’ve got to get moving again.  I know my healthy future depends on it.

I believe that research is critical to learn more about prevention and/or treatment that may lead to a cure for lung disease.  I joined Lung Sask’s Sleep Apnea and COPD support groups to find the support I needed as a patient. I also recently joined the Board of Directors at Lung Sask, where I look forward to lending my voice to work towards the goal of healthy lungs for everyone in Saskatchewan.”

If you or a loved one has been diagnosed with COPD you are not alone! Join our online community of support.