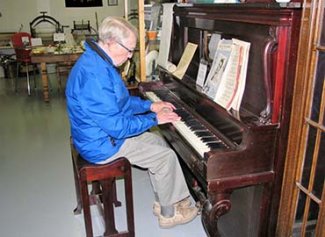 By being the first province to make the care and treatment of TB free of charge, Saskatchewan paved the way to the free health care we know today.

At 94 years young, Derek still plays a beautiful melody on the piano. These days he is mostly heard in the Anglican Church in Fort Qu’Appelle where he is an organist, but people still remember him playing for the staff and patients at Fort San where he worked in the Business Office and later was in charge of the Fort San Post Office. When he wasn’t playing the organ for the Fort San glee club or for the concerts that were put on for the patients and their families, he was running the Fort San post office where he too had a role in chasing the cure for tuberculosis (TB). As a postmaster, he not only made sure all the staff and patients received their mail quickly, he played a big part in the Christmas Seal campaign. Christmas Seals was the most popular campaign for the Anti-Tuberculosis League which later became The Lung Association of Saskatchewan and is now known as Lung Sask.  Christmas Seals were introduced over a century ago to raise money to fund healthcare education and to fund the crusade against TB.  The decorative stamps raised funds for the diagnosis, treatment and prevention of TB.  The fight against the contagious disease was long and tedious.

By being the first province to make the care and treatment of TB free of charge, Saskatchewan paved the way to the free health care we know today. “It was a great place to live and I enjoyed every minute of it,” exclaims Derek.  He describes Fort San as a “close-knit community made up of treatment facilities, a skating rink, curling rink, a school up to grade eight, an auditorium where plays and concerts were held, and a dance floor for celebrations.”  Derek began his career in the Business Office when he was 32 years old in 1956.   He continued working there until the Sanatorium closed in 1987.  Derek was the last employee at Fort San.  “I had a ball every day,” says Derek smiling.  It’s been decades since Derek retired, but he still continues to support Lung Sask and collects Christmas Seals.  In fact, he presented Lung Sask with a scrapbook containing every edition of Christmas Seals since the campaign started. The book captures over a hundred years of kindness and generosity of the community and neighbours who came together to raise funds to support those suffering from lung disease.

The kindness and generosity of the community and neighbours is still important to Derek. At the age of 97, Derek was awarded the 2021 Saskatchewan Volunteer Medal by Lieutenant Governor.