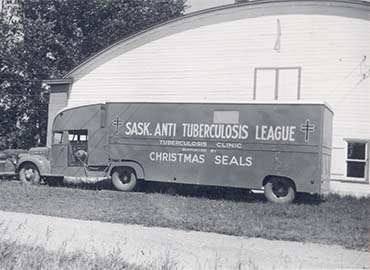 The "Great White Plague" was the name used to describe tuberculosis. To fight the highly contagious disease the Saskatchewan Anti-Tuberculosis League was formed in 1911. Under its auspices Fort Qu'Appelle Sanatorium, pictured, was opened in 1917 to provide rest and fresh air. But the cure was long and tedious; few could afford to remain until they were healed. So in 1929, through the League's urging, Saskatchewan was the first province to make the care and treatment of tuberculosis free of charge.

Dr. Ferguson, the medical director of the "San," had a strong commitment to fighting tuberculosis and tremendous compassion for TB patients. Doctors, nurses, and staff walked that extra mile to help the patients. The patients themselves cheered and nurtured those around them. A caring, loving atmosphere permeated the sanatoria. Bonds of friendship were formed which remained strong despite time and distance.

That powerful sense of the each individual's worth continues to permeate the activities of Lung Sask. The Mission Statement reflects how Lung Sask has maintained the League's fervent belief in everyone's right to lung health. Each year it re-commits all staff and volunteers to the purpose.