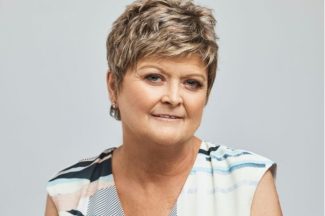 Everyone should talk to their family about their wishes to become an organ donor because people waiting may not have tomorrow. Getting a second breath means a second chance at life.

Have you ever waited by the phone, waiting for an important call?  Imagine waiting over a year for a call that would save your life. Charlotte L’Oste-Brown knows all too well what that feels like.

Charlotte is a mother of two who has always led a busy life.  She coached softball, sat on the local school board and owned and operated a greenhouse in her hometown Hazenmore, Saskatchewan. Charlotte was a farm girl from the get-go and her love for planting and growing turned her “hobby into a business.”

All that changed in 2003, when she was diagnosed with pulmonary fibrosis, a disease that takes your breath away.  For Charlotte, the terminal illness was devastating. As her disease progressed, she had to give up her two-story home and her greenhouse. She had no other option as her disease progressed but to eventually move into room and board housing closer to medical services in Regina. Activities she enjoyed like curling, golfing and dancing became too much, and eventually, everything left her breathless.

In the summer of 2014, a lung infection and thick forest fire smoke caused Charlotte’s oxygen saturation to drop to 38%, well below the normal level of 98%. Charlotte’s condition was serious and she was hospitalized. Charlotte was given the one and only choice was to wait for a  double lung transplant  Feeling like she had too much to live for and wanting to spend more time with her daughters, the enduring wait was on.  On December 1, 2015, she was placed on the transplant wait list. She said during that time she, “wasn’t waiting for someone to die, but rather a woman who had no other choice but to wait for someone to give the gift of life.”

While waiting for that life changing call, Charlotte became a Lung Ambassador for Lung Sask.  She encouraged everyone to talk to their family about their wishes to become an organ donor.  She said, “people should talk about it today because people waiting may not have tomorrow.”

The Price to Breathe

Charlotte describes having pulmonary fibrosis as “daunting, frustrating, expensive and stressful.”  She was attached to a 50-foot hose that supplied her with oxygen and she couldn’t go anywhere without it.  She was too ill to work full-time which made it difficult to support herself on a limited income. She required so much supplemental oxygen, her tanks would run out of the allotted monthly amount. There was the option to pay for extra tanks but being on a fixed income just forced Charlotte to be more housebound in order to use the home oxygenator.

People from Saskatchewan in need of a lung transplant have surgery in Edmonton, Alberta. Although the surgery, treatment in hospital and anti-rejection medications are covered.   Charlotte along with a support person had to incur the costs of travel, medications to treat side effects, food, utilities and accommodations for her three months in Edmonton. On average everyone in need of a lung transplant will have to pay on average $20,000. A 24-hour caregiver is needed for 3 months. This is another cost that needs to be considered given each person's situation.

The cost of a transplant is significant. “It should be free for everyone to breathe,” says Charlotte. Aside from the financial stress, Charlotte would go to bed every night hoping she would make it through without choking or losing her breath.  Then she would start each day wondering if the call for her lung transplant would come. She says, “It really is a catch 22 for a  terminally ill person is expected to wake up every day and be positive while knowing their life is cut short and as always wondering if is the day they will die.”

For someone who wanted to spend more time with her daughters, it was fitting that Charlotte got her life-saving call on Mother’s Day, 2017.  “I just couldn't believe it when the phone rang!  I sat down and screamed.  My wishes were coming true.”  Later that day, Charlotte flew to Edmonton to have her transplant, and just a few hours later she had two new lungs.

Making the decision to have a lung transplant is a difficult one. It is a serious operation and an expensive process. Charlotte will need medication and treatment for the rest of her life.

Less than a year since the operation, Charlotte is still recovering, but she’s busy “living again!” She’s happy to be back at work part-time, taking ballroom dance lessons, and golfing.

It is the simple things that we often take for granted that Charlotte really wanted to be able to do again like going out to get groceries without getting tired, going shopping and out for lunch with her daughters, and most important simply being able to breathe easy and cry happy tears for a change.

A Gift that Means so Much

To Charlotte, getting a second breath means a second chance at life, the opportunity to pursue her goals, time to experience her dreams, and live again one easy breath at a time. Having gone through this journey she has turned her challenges into something positive by advocating for higher organ donation rates in the province and working with Lung Sask to fund patient support services. She feels she has become a more understanding and compassionate person and that “it’s her responsibility to be the best she can, and get the most out of her organs – both the new and old ones.”