Cannabis contains hundreds of chemical substances. More than 100 chemicals, called cannabinoids, have been identified as specific to the cannabis plant. THC (delta-9-tetrahydrocannabinol) is the main psychoactive cannabinoid and is most responsible for the “high” associated with cannabis use. Another cannabinoid is cannabidiol (CBD). CBD has little or no psychoactive effects, so you do not feel high. CBD counteracts some of the negative effects of THC. 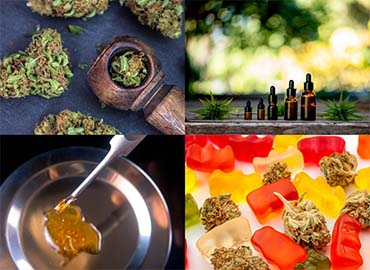 Cannabis can be used in many different ways. For instance, it may be rolled into a cigarette (called a joint), mixed with tobacco and rolled into a joint (called a spliff), or packed into a pipe or bong and then smoked. Cannabis can also be vaped. The extracts (such as oil or shatter) are often dabbed with an oil rig pipe, called a dab rig. Cannabis may also be used as an ingredient in food.

There are still many unknowns about cannabis and its long-term effects on lung health, but we do know that the inhalation of smoke is harmful to lung health as the combustion of materials releases toxins and carcinogens. These are released regardless of the source – whether it is burning wood, tobacco or cannabis. Knowledge about the long-term effects of cannabis smoke is still limited but early research studies have demonstrated harm that can lead to chronic bronchitis.[study] Other studies suggest that frequent and heavy cannabis smoking is associated with cough, sputum production, wheezing and a decline in lung function.