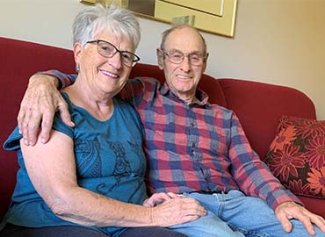 My husband Mike and I got diagnosed with lung cancer a year apart and our lives changed forever.

The news of a cancer diagnosis hits hard.

Nothing really prepares you for it; you move from shock to disbelief, sadness, and fear. Our journey with lung disease began with Mike having COPD (Chronic Obstructive Pulmonary Disease) and then in 2013, he developed lung cancer in both lungs. As if that was not already bad enough, I also got diagnosed with lung cancer in 2014 barely a year after Mike’s diagnosis.

His health took a heavy toll on our lives as he had to retire from farming. Even though farming means so much to Mike, he was too tired to keep up with the daily commitments of the job and had no choice but to stop. We both had to undergo surgery to remove the tumors in our lungs. My surgery was especially difficult because the tumor in my lung was so large that the surgeons had to remove a rib in order to take it out completely. Thankfully, we both recovered after surgery and did not require chemotherapy afterward.

Fast forward to 2020 when we got the dreadful news that Mike’s lung cancer had returned to both lungs, I was so terrified.  I had thought the worst was over after our surgeries and that we were both cancer-free. I wondered why all of these were happening to us, could something be wrong with our lifestyle? I blamed it on farming, and chemicals because I wasn’t sure of what the possible cause of the cancers could be.

A lot has changed about how we live now. I really have a lot of anxiety and am still terrified a lot of times. Mike and I experience shortness of breath a lot, we can’t really go outside a lot, and have troubles with masks and machines. Mike also gets tired quickly and the stress of dealing with cancer is getting to him both emotionally and mentally.

We can’t really have the freedom we used to enjoy. Even though we have both gotten the Covid-19 vaccination three times, we don’t see and interact physically with people a lot and that is really hard. Leaving the farm and moving to Saskatoon as we can no longer keep up with running it is a big decision we have to make. This is especially hard for Mike because he has lived here all his life and he hasn’t been able to farm since his first cancer diagnosis in 2013.

I have since joined the Lung Cancer Support group as I’ve really needed the extra support, especially after Mike’s second diagnosis.  The group creates a platform for patients and caregivers to share experiences and offer support to each other. I’ve also enjoyed the tremendous support and guidance of Jill Hubick, one of the nurses at The Lung Association of Saskatchewan.

When we heard about radon from the Lung Association, we thought that might have been the cause of our mutual lung cancer diagnoses, so we immediately had our home tested. We were so happy the results showed the radon level is low. Mike and I now make our children test their homes, as the last thing you want is to see is your children suffer as we did with lung cancer.