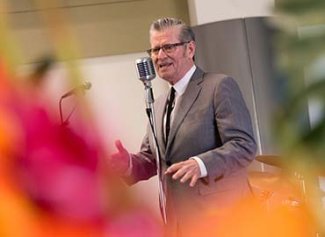 I was 54 and had a lot of living left to do. Waking up after my lung transplant was surreal. I was reborn and had a fresh start. I have a new attitude. I respect my body and my life much more now.

Seeing Darcy Murdoch sing and perform now, you would never guess that just three years ago, he struggled to hold a single note.

Originally from Saskatoon, SK, Darcy has been a singer and performer in Vancouver, BC for years.  He has made a career entertaining at anniversary celebrations, cocktail parties, seniors’ homes, and corporate gigs. When singing, he prefers songs by Frank Sinatra, Tony Bennett and Dean Martin to name a few. Taking on many roles, Darcy performs as a crooner Bobby Bacchaus, impersonates Elvis Presley, and in December appears as Santa Claus all across Vancouver. Each act brings its own challenges, but the most difficult job for Darcy was the very real reality of becoming a patient with lung disease.

In 2011, Darcy was diagnosed with idiopathic pulmonary fibrosis (IPF). IPF is a long-term disease where the lungs become scarred. When he was first told he was sick, he was angry, depressed, and afraid. “I was 54 at the time,” he says, “I had a lot of living left to do.”  He didn’t want to be sick.  After his diagnosis he was put on oxygen.  “I resisted oxygen,” he explains.  “I was ashamed to walk down the street with nose tubes with everybody looking at me. By doing that I was admitting that there is something wrong with me.”

The Cost of Being Breathless

Darcy remembers a gruelling process to prepare for a lung transplant.  “I was being tested for what felt like every single thing possible, meeting with a social worker, a psychologist, and reams of doctors in order to determine if I could withstand an 8 hour surgery and a long recovery.”  His life became very stressful.  “It was a tough decision to stay on the transplant list.  I had to put my singing career on hold which impacted so many areas of my life and livelihood.” The entertainer relied on his gigs to pay his bills.  Despite his worsening condition, he made the difficult decision to remove himself from the transplant list for three months in order to save enough money to be able to take the time off work to recover from the lung transplant.

Darcy put the little energy he had left into getting in shape for the surgery.  He also became more active in a lung support group.  Six weeks after putting his name back on the transplant waitlist he received the call that changed his life forever.

Waking up to a Future

While waiting for his lung transplant he carried a pager so the transplant team could notify him if donor lungs became available. Darcy carried that pager everywhere he went.  But on January 30, 2015 he somehow forgot to put his pager beside his bed. Darcy remembers waking up the next morning to someone knocking on his door. When he opened the door he found his building manager eager to speak with him.  His building manager held out a cell phone and said “It’s the transplant team!  Do you want to talk to them?” It was a phone call Darcy will never forget. They told him they had a pair of lungs for him. He was literally waking up to a future.

When Darcy was being prepped for surgery, it was fitting that the OR nurse played Sinatra’s song, Come Fly with Me. Maybe it was the song, but before the surgery Darcy had a good feeling.  He said, “For some reason I thought I was going to come out of this okay.”

Hours later, Darcy describes waking up in the ICU after his lung transplant as “surreal”.  “I thought, wow, I’m alive. This really happened!”

These days, Darcy says “you need a sheep hook to get me off the stage.” Before his transplant, Darcy was having trouble holding notes and struggling to keep singing. Now, he’s revelling in being able to sing without that difficulty. He enjoys telling people about his transplant after they’ve seen him perform. He says, “My lungs are working great! I get a lot of use out of them.”

“Life is amazing!” Breathing Strong and Giving Back

With that new attitude, Darcy stays active in the gym and in the lung health community. He brings the two together by participating in Climb the Wall with The Lung Association, British Columbia every year. The fundraiser is a 48-storey climb at the Vancouver Wall hotel. Last year, Darcy climbed all 48 storeys twice and was the top fundraiser. He plans to do it all over again this year. He also makes time to speak with others living with lung disease, attends lung support meetings, and is a Breathe Ambassador for The Lung Association, Saskatchewan. Darcy says he made a vow to himself that when he got better he’d do all he could to help others, and he’s certainly sticking to that promise.