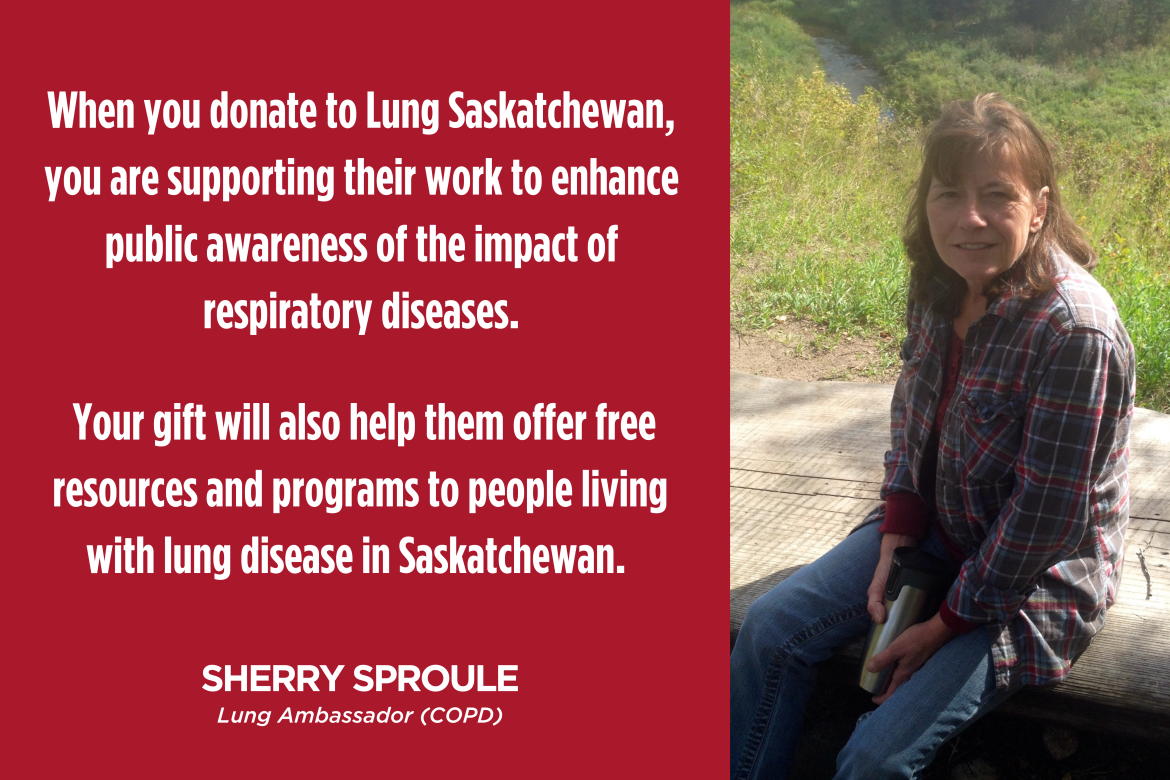 When you have a lung disease, it feels like your life as you know it will never be the same.

My health journey dates back almost 30 years; I was diagnosed with double pneumonia (a lung infection that affects both lungs) and I got quite sick. My doctor told me that I had to be careful about respiratory issues as I was more susceptible to bronchitis. I had occasions of getting bronchitis and pneumonia throughout the years. I continued to be very active most of my life and did not think my lung health was a big issue. I finally quit smoking but before then I would quit smoking on and off, as I did not consider myself a big smoker. This was a big mistake as even one cigarette can be too many.

The Big Switch
In 2017, I was diagnosed with chronic obstructive pulmonary disease (COPD). It was not affecting me so much at that time so I continued my life and didn’t worry about it. Unfortunately, I started noticing some major changes in my health. I would get winded walking and struggled at work with the heavy lifting. My job entailed me to put together orders, stacking, and unloading carts working in retail stores and their warehouses.

Due to the pandemic, a year of not being able to go anywhere or do anything, my physical abilities reduced a lot. In late spring of 2021, a COPD Clinician Nurse contacted me and I learned more about my COPD. I was forced at this point to come to terms with reality and deal with everything that is happening in my body. I also had some sessions with an exercise therapist over the phone during the first year of the lockdown and started attending pulmonary rehab sessions when in-person programs started.

Adjusting To New Reality
The most discouraging aspect for me about getting COPD is that although the disease is treatable, there is progression. I have had to accept that I am never going to get completely better. One of the nurses that visit the pulmonary rehabilitation program I attend, suggested that I look into grief counselling as I might need help processing where I am now in terms of my health. Sometimes I think of the things I may never be able to do again like running. There are other things I need to now plan for in advance, like playing with kids and cleaning my house. I cannot be around sick people, as I would be severely impacted.

I have always been a big dog lover and have had dogs most of my life. When my last dog was gone, I started babysitting my friends’ dogs when they went on holiday or were not available. However, as my health deteriorated, even taking a dog for a walk became difficult and I miss that terribly! I do not have the stamina I had before and that is the hardest for me.

Getting Support Makes A Difference
I joined Lung Saskatchewan’s COPD and Saskatchewan Quits support groups on my doctor’s recommendation and both groups are definitely instrumental in keeping me sane. Some days, it is a constant battle not to feel depressed but the support groups have helped a lot. Sometimes, I am very upbeat and have a good grasp of everything; and sometimes I get very discouraged and have to fight depression. Getting emails, resources, and learning about other people in the groups has been very useful. It is incredible just knowing you are not the only one going through your journey but that there are other people like you.

The support that I have gotten from my doctors, the staff at Lung Saskatchewan, and the support groups have been very encouraging. I remember somebody saying, “boy, you’ve got the dream team, don’t you?” I couldn’t agree more! There are possibly people out there in the world going through a journey like mine, who have given up because they do not know what to do. It is quite easy to get into that state as you are dealing with not only the physical challenges but also the mental challenging of living with lung disease.

Adjusting to Living With Stigma
Telling people that you are sick can be tough. I could only tell a handful of people about my lung disease because it was almost embarrassing. The stigma associated with having this disease makes it hard. People sometimes make you feel it is your fault and that you did something wrong to have caused it. I could not even say COPD out loud because of the stigma.

There is some judgement because I smoked and people feel this is the reason for the diagnosis. Smoking is not the only reason for me to get COPD. I had trauma to my lungs at a young age as well as being exposed to chemicals, which would also have contributed to my diagnosis. Knowledge about COPD is still growing but there are still some misconceptions about the disease. When I get out of breath, they say things like “why are you so tired? Oh, come on, snap out of it!”

P.S. Did you know that about 1.6 million Canadians live with COPD and over 64,000 Saskatchewan residents live with COPD? Lung Saskatchewan offers various free support and resources for COPD patients such as the COPD handbook, online Support Group, Lung Helpline, and Medication Resources.