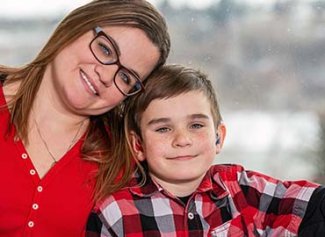 If you’re left breathless from lung disease, never give up and always fight for what you want in life. I hope my story will increase awareness about the importance and impact of organ donation.

Most six-year-olds wish for a new toy for Christmas, however, all Luka Brewer wanted was for Santa Clause to bring his mom a new pair of lungs.  Jennalee Brewer was born in the small community of Wishart, Saskatchewan.  She remembers growing up playing sports and leading a normal life despite being diagnosed with cystic fibrosis (CF) at just three months old.

CF has no cure and it is the most common and deadly genetic disease affecting Canadian children and young adults.  The disease can affect the entire body, however, it mainly impacts the digestive system and the lungs.  Jennalee required medication to help digest her food and assistance to clear the mucus that would constantly build up in her lungs. “I had to do my chest therapy two-three times a day,” explains Jennalee.  Despite her rigorous treatment regime, Jennalee thinks of herself as lucky. “I was fortunate enough to stay rather healthy as a child. I didn’t have my first really serious flare-up until grade 11 when part of my lung collapsed and I was hospitalized,” recalls Jennalee.

Growing up Jennalee didn’t feel limited by her disease.  In July of 2016, her breathing deteriorated significantly. She was put on supplemental oxygen and was listed for a lung transplant.  “It was really hard to have a little one and be so sick. Eventually, my husband Cam had to quit work to stay home to care for not just my son but for me as well.  He cooked, cleaned, took care of the yard, made sure our bills were paid, and even had to help me wash my hair. It was really hard to ask people to help me do everything.  I have always been so independent,” says Jennalee. Despite his young age, Jennalee’s son Luka understood that his mom was very sick. He began asking Santa Clause to bring his mom new lungs.

On Oct. 10, 2017, Luka’s wish had come true.  Jennalee was flown to Edmonton where she received a new pair of lungs.  Her donor came from an area where tuberculosis (TB) was prevalent so as a precaution Jennalee had to take anti-TB medication for 9 months following her surgery.  Usually, lung transplant patients are required to stay in Edmonton for a minimum of three months.  However, Jennalee surprised her son and made it home early on December 22 just in time for Christmas.

Jennalee will always have CF, but she can breathe again. “I am able to keep up with Luka and enjoy time with family and friends,” she says with a smile.

Today Jennalee looks at her life as a gift. She is a Lung Ambassador for Lung Sask.  In her role, she tells others who are left breathless from lung disease to “never give up and always fight for what you want in life.” As a patient volunteer, Jennalee wants to help make things better for others with lung disease.  She also hopes her story will increase awareness about the importance and impact of organ donation and cystic fibrosis.